David Burns started racing in 1999 at the age of 43 in a Challenger Sprint Car, with the help of Hal Burns Jr and Hal Burns Truck and Equipment. In 2010, he added another car and switched to J & J chassis from J & J auto racing Truman West, who has been helping with our race program, and took on a more pivotal position along with Mike Cevillie, our motor guy.  In 2012, James Hatch ran one of our cars along with the owner, David Burns. In 2014, Steve Nix, Clyde Hill, Russ Hein, and Mike Civelli came on board and Steve took on the Roll as Advister and Driver for the 52 NM.  In 2015 we added Josh Jackson to the Team and drove the 52nm with a new number 37.

Josh was leading the Rookie points and was excelling in the Sprint cars when on Aug 6th 2015 there was a crash at Las Cruces Motor speedway. This was a serious crash that put him out for the next two years.  He still was leading and did get the Rookie of The Year 2015.  Josh has been running a Legends race car and Modifieds in a series at Las Cruces motorspeed (closed) and Vado speedway (new) and was the 2019 Champion at Vado Speedway. 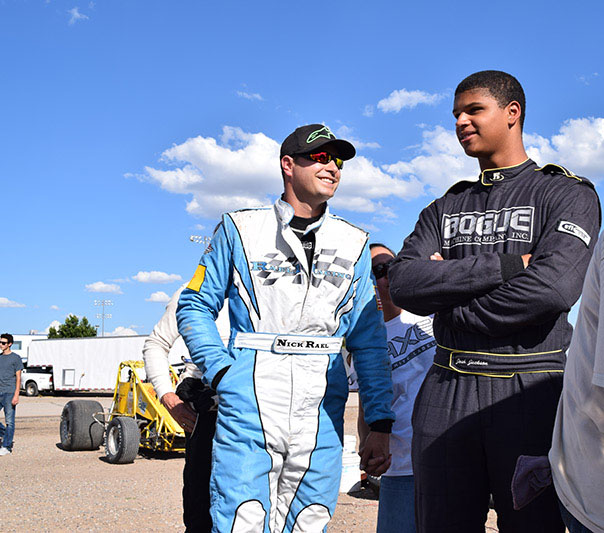 In 2016 we brought in Caleb Saiz who had just graduated from NMME and had raced Mini Sprints.  2016 was Rookie of the year NMMRA Non Wing sprint cars; 2018 was his break-out year.  2019 seen some changes as Caleb took time off from racing to become a fire fighter / EMT certified  with a full time position with the BCFD .  He came back to get back in the J & J chassis, Napa Belts and Hoses,  Napa Filters , Schaeffer Oil, Performance Plus racing engine sprint car and back to his winning ways. Caleb finished out the season 9th in NMMRA Non Wing and 5th in the Sandia Speedway 360 wing sprint car division